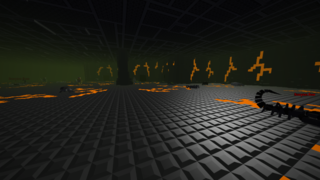 Minibosses are special enemies that can be encountered on floor two and below. They have loot tables that contain not only EXP and Gold, but also items such as potions, food, weapons, and more. Killing them in deeper floors will yield better rewards.
Their health scales depending total levels of nearby players, and often the floor they spawn in. Note that you can encounter rooms where there are multiple minibosses!

The Mantis miniboss can be found in floor two and below. It will approach the nearest enemy before pausing a short distance away. After 2 seconds, it'll charge towards its target and attack rapidly for up to 2 seconds before flying away and launching numerous poison attacks. The amount of melee attacks and frequency of poison attacks increase in deeper floors.

At floors five and six, it can give the Mind Toxin curse upon direct contact.

The Scorpion miniboss can be found in floor two and below. It will charge directly at the first player it detects or deals damage to it. Upon sustaining heavy damage or being struck with a melee attack, it'll attempt to run away whilst laying an egg. If players aren't able to destroy the egg quickly enough, it can hatch into a Spitter that'll lob poison attacks. Direct attacks can poison the player for 10x the value of Spitters' poison in a given floor (20 ticks being the base for Floor two, +10 every next floor).

On lower floors, the Scorpion will drop more eggs whilst fleeing, and the eggs will hatch into the floors' respective Spitters.

The Dark Wraith can be found in floor three and below, and will spawn with numerous allies. It uses a longsword that can pull players towards it when it performs its combo at point-blank, and a Shadow Bomb when the player strays too far from itself.
Reward Chests from Drak Wraiths can very rarely contain a Sword Fragment, which is used to craft the Wraithcutter.

Occasionally, the player may encounter a large wasp swarm instead of the usual miniboss. Having low health but being incredibly fast, wasps can easily kill a lone adventurer if they're unable to fend them off. They spawn in groups of 8 in Floor four, 10 in Floor five, and 12 in Floor six.

The Mesmerizing Shade can be found in floor four and below. A ranged spellcaster, its main gimmick is spawning clones to teleport around with. By itself it will deal very low damage, but it may become deadly with its clones left intact.

When attempting to obtain Gram, players must first fight against Mashhit in floor five or six before being able to claim their reward. Mashhit comes in three variants: Corrupting, Bloodthirsty, and Amok. Corrupting variants apply double the curse stacks, Bloodthirsty variants heal upon successfully landing a hit on you, and Amok variants deal more damage.

When the guard initially drops to or below 50% HP, they will receive Sarmina's blessing alongside having their health restored to 75%. Whilst in this state, the guard will receive benefits of the Crown of Protection, and become invincible for 3 seconds. As a last ditch attempt, they will fire off a Sunburst spell shortly after reaching 10% HP.