Revision as of 19:26, 23 July 2022 by Jerry McLarry (talk | contribs) (→‎Melee: Re-organization attempt #1. Table is much cleaner, information is less all over the place, and information is also more condensed.)
(diff) ← Older revision | Latest revision (diff) | Newer revision → (diff)
The printable version is no longer supported and may have rendering errors. Please update your browser bookmarks and please use the default browser print function instead. 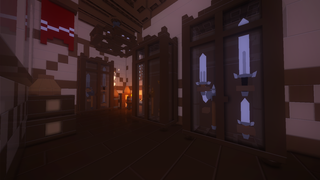 Specializing in close quarters combat while tanking attacks left and right, melee-class players form the bulk of the frontline. While they're impervious to most attacks, they're relatively weak when it comes to casting spells and dealing with ranged enemies, and can still fall when faced with too many foes.

Here's the details surrounding the various melee types:
Daggers have a fast equip time and high DPS potential, but lacks in terms of range.

Shortswords have a basic equip time, damage, and range. No upsides or downsides, they're perfect for any situation.

- Special ability: Buckler - Hold out a shield which will block most incoming projectiles, slightly reduces incoming melee damage, but slows the player down immensely. Players can still swing while having the buckler out. Increases your survivability.

Battleaxes utilize a two swing combo. First swing deals less damage but strikes in a wide arc and can hit multiple enemies. Second swing will only hit one target, but deals massive damage.

Longswords have a long equip time, but offsets that with a large hit range and high damage output. Make the downtime between equips worth it.

- Special ability: Sweetspot Potential - Attacking near the edge of its range will deal extra bonus damage. Increases your damage output even more while ensuring that you'll take minimal damage in the process.

Spears have a long equip time and cannot hit targets at point blank, but can hit targets at a distance. Decent damage output. Longest hit range out of all weapon types.

- Special ability: Dodge Roll - Dash backwards away from target. Perfect for ensuring that you're still within the range to deal damage.

For the purposes of this table, all weapons' tiers are together in one entry. They'll be separated by a / to indicate a different tier.