March 24, 2020 16:28:12
Game updates March 24th This is a relatively small patch half of which is just documenting the hotfixes since the last patch.

Hotfixed last patch
- Added a new legendary weapon.
- Fixed an issue where lawful altars would transform all applicable armors in your inventory rather than just one.
- Fixed Badspot being banned.
Permalink
Pecon
Administrator

March 13, 2020 18:50:56
Game updates March 13th In light of the national emergency, some of you may have found yourselves with more free time than expected. For this reason, I have restarted AoD early to give people more things to play during this time. This is a minor update, and the current save data will continue to be used since there are no major changes to the game.


Minor changes
- Added new original music to the overworld composed by APX. (So make sure you have music downloads enabled!)
- Lawful players can now decline having their armor transformed.
- Fixed a bug where the Piety spell would protect their casters from self-damage. This was completely unintended.
- Major performance enhancement on the server side that should reduce server lag when opening large rooms such as boss chambers.

Servers will be going up soon. Hope to see you all here, I promise you can't get sick through the internet!
Permalink
Pecon
Administrator

January 24, 2020 15:13:56
AoD Hiatus In case you're out of the loop I'll be leaving this info here as well. AoD is on hiatus until this summer when I'll likely do another large update and reset. Also, there will be a minor cosmetic reward based on your progress during this and the previous AoD hosting sessions.

See you all this summer! In the mean time, I will probably host Boss Battles on and off. Join the discord for notifications on when that will be hosted, as well as updates on when AoD will be hosted again in the future.
Permalink
Pecon
Administrator

Sorry if it's on the forum's already,Not having a dig but the server seem's to be really struggling the last few day's. IE: Lag spikes, Lag in the HUD not showing current health/stat's etc. NPC's glitching (Some taking a long time to attack) / odd movements / weird game play in general. Door's taking forever to open. Not sure if the server need's to be reset or if it's something more. I'm not the only one experiencing these issue's either. A few of us don't even attempt to go for the spider boss as there's a high probability that something will glitch and you will end up dead because of it.

Prior to this I've been loving the server and hope to see more updates with new bosses etc.

Yes, this is a symptom of the server being up for too long. I restarted the server last night so this should stop happening.
Permalink
Pecon
Administrator

December 18, 2019 23:53:25
Game updates December 18th Just another minor patch. I have more ambitious changes in the works to address curses, but I have not had time to work on those changes yet.


Minor changes
- Added an extra free starting bank slot. Everyone will have an extra bank slot, and this extra slot does not affect the pricing of bank upgrades.
- Added a small 'step' in the moat next to each bridge to help players jump out of the water.
- Fixed some other minor issues in the town build
- Linearly increased the price and effect of EXP potions by x5. This does not affect their gold to EXP ratios, but should help high level players be able to spend gold on EXP a bit faster. Hopefully this helps maintain their sanity.
- Fix players getting stuck in a wall after recalling or spawning.
- Made some changes to and fixed an exploit with a certain new legendary.
Permalink
Pecon
Administrator

This is completely wrong. All buffs and debuffs are lost on death, and your max HP and mana are returned to what they would have been had you only gained it via level-ups.

killing one results in you losing a ton of max HP + max mana,

That also is not a result of doing this. 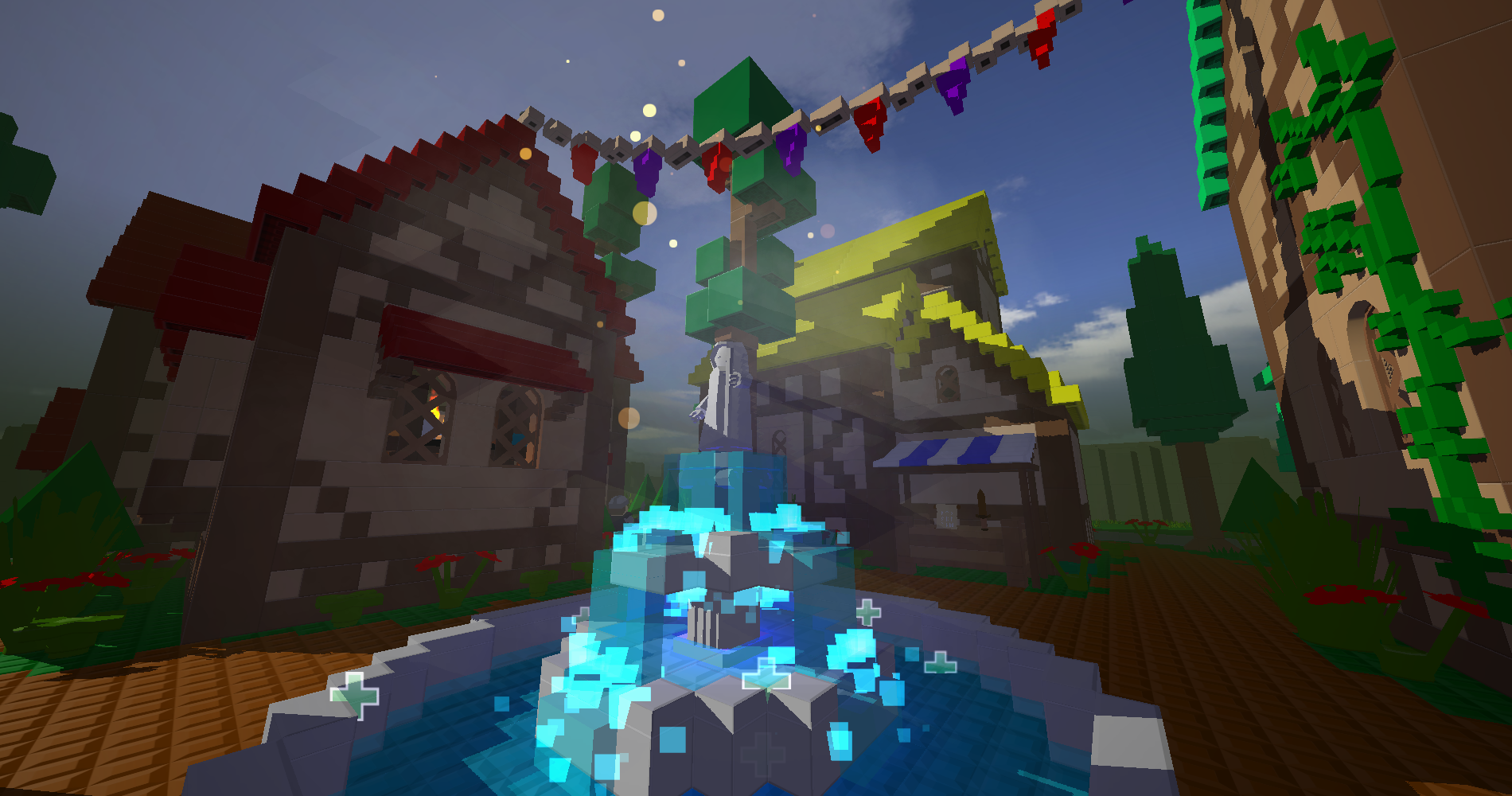 - Contains all the same amenities as the previous town.
- A big thank you to The Brighter Dark for making this new town for the game!

Guard Changes
- Due to the new town having more tight spaces, guards have been buffed so they don't have to rely on piling so much to be a threat.
- Added an extra guard since coverage inside the town was so poor.
- Guards have had their AI improved slightly.
- Guards now teleport back to their station if they get stuck somewhere else for more than 30 seconds (Does not count time spent chasing players).

Curses
- Curses are a new mechanic and are triggered in specific circumstances.
- Each curse you are inflicted with consumes an inventory slot, and will force your lowest value item onto the ground if your inventory is full when you get one.
- Currently, curses can only be removed through death.
- Most curses can only occur once, but there are exceptions.
- The main goal with curses is to add a mechanic that permanently damages players and may eventually force them to die, which may help with controlling endless positive buffs.
- The secondary goal with certain curses is as a punishment to some things that don't warrant being removed completely, but need to be discouraged somehow.
- Some of you may experience curses immediately since they will be applied retroactively.

Other changes/fixes
- Poison ticks now include a visual effect.
- Added some missing item icons.
- Some new items are now available in the legendary item pool.
- The 10 level difference player killing punishment is more effective now.
- Increased the amount of negative alignment that can be gained through karma.
- Guild creation cooldown increased to five minutes (was one minute).
- Large bounties are now properly supported.
- Doing /suicide or ctrl+k now brings up a confirmation prompt.
- Admins cannot leave the minigame and lose all their items anymore.
- Fixed a bug in trading that allowed you to 'offer' the same slot multiple times, which might have enabled some form of scamming.
- Piety's on/off state now saves through rejoins. (Note: Will still reset to off on death)

The servers will be down for a while, as I have to test some changes in the saving system and it is not safe to do those changes with the servers still running. I will post in the Discord when the servers are back up with the live patch.
Permalink
Pecon
Administrator


Minor changes
- EXP drop rates for the Troll and Spider bosses have been changed to a logarithmic curve which tops out very quickly to keep EXP rates more sane.
- EXP drops from the Troll and Spider bosses now have additional scaling based on the number of participants in the fight, to keep group bossing worthwhile.
- Map culling timers have been increased for lower brickcounts. Rooms should despawn less frequently as long as the brickcount isn't very high.
- Spells and scrolls' centerprints now stick around as long as you're holding them, and go away immediately upon swapping to a different item.
- Detection for being outside the map has been improved.


Hotfixed during the last patch
- Fixed a tip that was out of date.
- Fixed some issues with Piety.
- Added some cool loading screens that you'll see when you connect if you have Blockland Glass installed.
- Fixed a bug where no items were retained if your player died while disconnected/crashed in the dungeon.
- Fixed a bug where items returned to you were not actually your best three items.
Permalink
Pecon
Administrator

Why are items deleted as a form of punishment for disconnecting from the server outside of town? To prevent players fleecing out of PvP? Imo, that is so uncommon it doesn't even merit such a mechanic - most of the time it's players crashing anyways.

I love the server, but that mechanic discourages players from leaving the town for fear of a (Mis) or datablock error forcing a crash and losing everything. I've heard them say as much.

This is not an intentional mechanic and is actually a bug I am looking into today. You're one of many people affected.

edit: I restored your backup, it was unfortunately a pretty old backup but it is better than nothing.
Permalink
Pecon
Administrator

ISSUE: I've been playing the server for a while now, and spontaneously suffered my first critical error which forced a crash (while outside of town).

I am now unable to join either server. Help me understand what I can do to stop this.

First get this sqlite database editor

Close blockland and open your cache.db database and then switch to the 'execute sql' tab
Paste this command into the SQL box:
Code

If you get that, go ahead and press "write changes" and close the database. This should hopefully fix the issue for you.


Barring that more technical fix, you can simply delete your cache.db file and let everything redownload. I offer the above fix so that you don't have to dump potentially years worth of cache data that helps you load servers quickly.
Permalink
«  [1]  2 3 ... 5 »